2
Backup
A backup offer is when a home seller has accepted an offer from a buyer, but is still accepting offers from other buyers. Sellers state that they are accepting backup offers if they think the current offer may fall through.
$3,100,000
Biscayne Beach , Miami Beach, Florida 33141
MLS#: A11138553
5 Beds
5 1⁄2 Baths
1,900 Sq.Ft.
0
2 Parking
2022 Built
Schedule Tour
Remarks: 8000 sqft prime waterfront vacant land (50 ft waterfront) located in stillwater dr in miami beach. sold with approved building pe...

18
Backup
A backup offer is when a home seller has accepted an offer from a buyer, but is still accepting offers from other buyers. Sellers state that they are accepting backup offers if they think the current offer may fall through.
$329,000
Biscayne Beach 7975 Crespi Blvd Unit 1, Miami Beach, Florida 33141
MLS#: A11114068
2 Beds
2 Baths
3,128 Sq.Ft.
0
0 Parking
1953 Built
Schedule Tour
Remarks: Excellent opportunity to own a condo by the beach without an hoa. great choice for a first time home buyer, vacation home, or as a...

Biscayne Beach is contemporary waterfront homes in secure gated community of North Beach. Biscayne Beach offers a somewhat secluded location with the benefits of urban living a stone's throw away from nature and the sand. The ideal South Florida neighborhood can consist of many things to many people. For some, feeling the sand between their toes is a priority, so proximity to the beach is important. Others care about frolicking in well-maintained parks. Others, still, prefer to stare at the soothing sea, so living on or near the water is key. Convenient shopping or the chance to grab a bite can be a consideration for some as well. In the North Beach neighborhood known as Biscayne Beach, all of those elements are available - and then some. If you are unaware of its semi-hidden yet central location, Biscayne Beach can be easily missed. Surrounded by three other neighborhoods, the community stretches from 77th to 86th Street in the City of Miami Beach. The Tatum Waterway snakes along its eastern boundary, separating it from the North Shore neighborhood, which is just west of A1A. The one-block-long Stillwater neighborhood protrudes westward into Biscayne Bay from Biscayne Beach's northwestern end. And the horseshoe-shaped area called Biscayne Point extends west from Biscayne Beach's southwestern side.

Platted in 1945, rather late in Miami Beach's history, Biscayne Beach is not surprisingly populated by a multitude of modest but eye-catching Miami Modern multi-family dwellings. These good-looking apartments and condominiums from the 1950s are fortunate to have a lovely view too. The Tatum Waterway is right outside many windows. Also adding to the neighborhood's housing stock: Single-family homes which line Hawthorne Avenue, on the west side, and look out over the water as well as toward neighboring Biscayne Point. During the recent real estate boom, a series of sleek new townhouses were planned and approved but the realty of the real estate market caught up to the excitement of the boom and the new projects have yet to be constructed. While most neighborhoods sorely lack green space, Biscayne Beach has not one but two parks. At the juncture of Hawthorne Avenue and Crespi Boulevard, the triangular Crespi Park sits at the area's south end. Travel north on Hawthorne Avenue and Stillwater Park, a pleasant introduction at the gated entrance for Stillwater Drive, will be your ultimate destination.

A slight detour east leads to the shores of the Atlantic Ocean. Just a few short blocks away, the wonderful North Shore Open Space Park, with its sea grass, sea grapes, and powdery white sand beach, beckons. Plenty more opportunities for recreation, including tennis and basketball, are available at the nearby refurbished North Shore Park and Youth Center. Within walking distance of their homes, Biscayne Beach residents can also enjoy a variety of dining options ranging from fast food to Italian to Mexican cuisine in North Beach's Town Center business district. While shopping at independent stores peddling everything from hardware to sporting goods is possible in the nearby Bandshell Commercial District. North Beach is the northernmost section of the City of Miami Beach. It is roughly bounded by 63rd Street and Indian Creek Drive on the south side and 87th Terrace on the north. Neighborhoods within North Beach include Isles of Normandy, Biscayne Point, and La Gorce. 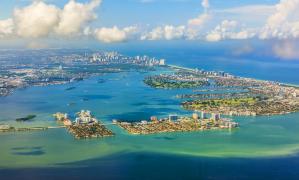 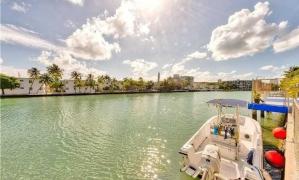 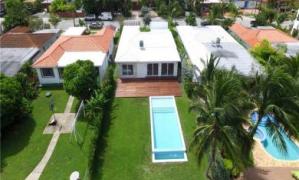