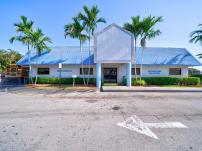 Retail/Office Space includes a reception area with a window and 2 private offices within. Cable and Internet ready.

Part of the Miami-Fort Lauderdale-Pompano Beach Metropolitan area, North Lauderdale is a small city in Broward County. The architect of this city, originally conceived as “The City of Tomorrow”, is the famous architect Morris Lapidus. He has worked on projects such as redefining the Collins Avenue in Miami Beach, Fountainbleau Hotel, and other modern hotel designs.

Surrounded on all four sides by land, this city is spread over an area of 4.6 square miles. With just over 15,000 households, the city has a estimated population of around 44,000 as of 2016. The male to female ratio is comparatively healthier than the national average with 94 males for every 100 females.

You can all the population as a young one with nearly 41% of them under the age of 24. The median age of the population is about 30 years. You cannot call it an affluent city because the average per capita income is around $ 15,557. About 14% of the population live below the poverty line.

The main languages spoken are English and Spanish. You have a sprinkling of French, Portuguese, and Vietnamese language speaking people as well.

The Haitians account for around 19% of the population with Jamaicans coming in at around 12%. Halloween Festival is the most celebrated festival in the area with the Hampton Pines Park hosting the Haunted Hamptons every year.
The majority of the people belong to the Black Afro-American race as they account for 54% of the population. The last ten to fifteen years has seen a jump in the population by around 27% mainly due to the real estate activities in the area.

A large number of developers have set about redefining the city landscape in the past decade or so. There is ample scope for development in this area. This is one of the fastest developing cities in this neighborhood.